Today, we are going to compare two premium Bluetooth neckbands – the Bose QuietControl 30  wireless headphones and Sony WI-1000x  and butt them together to see which one scores the most brownie points.

Bose is known for its balanced sound while Sony is often punchy-bassy-alive and premium in their build and performance. Do not forget to go over the pros and cons, at the end and make your purchase decision easier. 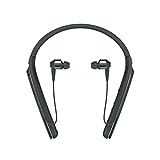 The Bose QuietControl 30 wireless headphones have a horseshoe design and lay flat on your neck. Built quality is sturdy and the surface is rubberized and feels premium.

This prevents the neckband from sliding during any movements and the frequent controls are in line with the right earphone. Volume up and down, microphone and pause/play buttons are on the inline controller.

The Sony WI stands for Wireless In-ear and the Sony WI-1000x is built from good quality plastic, but is not waterproof and does not fold.

Made from stainless steel and synthetic leather coating, the neckband is rigid than the Bose QC30. The earbuds are big and have an angle to accommodate noise-cancelling mic.

The controls are on the left side with raised symbols of + & – for volume controls, power button and pause/play. These are the control “buttons” and have built-in tactile feedback.

On the right side is the ANC button, but more about it later. You will find a micro USB to 3.5mm audio jack cable, few earbuds and a soft carry case. Unlike the Bose’s hard case, the Sony 1000x case is just a small cloth case.

Earcups on the QC30 are plastic without the rubberized coating with in-ear design. Vigorous movements are a no-no with the Bose QuietControl 30 because they shift ever so slightly at each jerk and eventually come out. If you are in the office or walking in a street casually, the earbuds remain in place and work perfectly fine. Battery life is 10 hours on the Bose QC30. However, I tried it with 50% volume and 50% ANC continuously for 10 hours; it still had 50% battery left on it. This means that the Bose QC30s have excellent battery life and outlives our expectations compared to other brands.

The Sony WI-1000X claims 10 hours of battery with ANC ON and 13 hours with ANC OFF. With wired usage, this can be increased up to 14 hours with ANC on. Real life testing only gave me 12 hours, which is in between their varied battery life claims.

The quick charging feature is a relief as it gives 70 minutes of play on a 10-minute charge on the Sony earphones while it gives 60 minutes on the Bose QC30.

Getting into the Active Noise Cancellation features, the Bose QC30 has ANC up and down buttons that adjust ANC levels. Therefore, these earphones are dubbed the “QuietControl” as it literally allows the controlling of quietness as desired. The inline controller barely has any weight and does not tug or add weight on the right side.

The ANC does not block out everything but most of the external noise. If you are playing music above 50% volume along with ANC, then almost 90% of the external noise is cancelled. However, Bose has left the ANC and the microphone performance the same as that on its predecessor, the QC20, and the experience is identical with some slight chattering seeping in from the surroundings.

Pressing the ANC button activates the feature on the Sony 1000x and toggles between ambient sound and ANC. The ANC is quite good, is at par with the Bose QC35, and feels much better than the Bose QuietControl 30.

The ANC mic rejects wind noise but has poor passive noise cancellation. There is also a brilliant ambient sound setting, that allows you to control the amount of ambient noise during playtime. Funny thing – they amplify even those sounds that you won’t consciously hear; like an expensive pair of hearing aids. LOL.

The adaptive sound settings are connected to a pressure sensor that measures the barometric pressure in your immediate surroundings for ambient sound control. Space-age stuff,  isn’t it?

The Bluetooth 4.2 connection is awesome in the Bose QC30s and works well through walls without any distortions and minimal audio leaks. The Bose QC30 has the ability to pair with 3 devices at once and swapping between them is super easy. It also has voice prompts to tell you which devices are connected to the Bose Bluetooth headphones.

On the Sony WI-1000x, there is NFC touchpoint on the right side of the neckband and on the left side there is a micro USB for USB charging cable and wired listening. Pressing the power button for a while would prompt the battery status and holding the play/pause button will activate Siri. Bluetooth connection 4.1 on the Sony Bluetooth earphones gives you good range, but swapping between devices is not possible unless we manually change it from the settings.

Bose QC30 has a neutral and accurate sound signature with equal frequencies that do not overpower each other. Bass is refined and clean allowing the mids and highs to be relevant.

The soundstage is distinguished and the audio channels are identical and creating surround sound audio in front and behind you for a richer experience. The Bose also allows the adjustment of ANC, volume levels, EQ and battery indication.

The audio quality on the Sony 1000x was not that great. The depth, mids and vocals are great but when it comes to the lows and highs tends to be too sharp and cause discomfort.

The alive bass is there but almost ruins the soundstage and frequencies making it muddy all the way. EQ does not help here much; the highs remain sharp, and the bass is muddled. Overall, a great disappointment from Sony!

If the audio was good on the Sony WI-1000x, then I would have chosen it over the Bose QC30. However, the Bose QC30 feels much better when it comes to audio in spite of lacking some unique features that the Sony Bluetooth wireless earphones had.