Ever wondered how your headphones work? And how to make the best possible decision when buying ones? Then it is important to dig deeper and see what drives your headphones.

What do drivers (transducers) do?

Basically, drivers are units inside the headphones that are in charge of producing the sound. What they do precisely is that they convert electrical signals into sounds.

A driver is made up of magnet, voice coils, and diaphragm. In short, a magnet creates a magnetic field, voice coils are there to move the diaphragm when an electric current passes through them and diaphragm vibrate in order to produce sound.

People are known to believe that the bigger the driver unit, the louder and better sound it can produce. However, that is not quite true. It’s the quality of the driver unit that plays a role in how good the sound is.

Size of a driver unit for earphones is between 8mm and 15mm, while for headphones it goes from 20mm to 50mm. We sometimes believe that bigger is better, but in this case, a bigger driver only means more powerful output, not better output. For example, Apple’s AirPods are very small earphones, but the sound they produce is in range with other amazing brands that make headphones with larger drivers.

Headphones have bigger drivers because they have the capacity to store them. A bigger diaphragm provides us with better bass sound, but at the same time, these earphones may have problems with producing sounds of higher frequencies. So, never buy headphones just based on the size of their driver unit. Things like the type of driver headphones use, noise cancellation and the frequency range of headphones are far more important when it comes to the quality of the sound.

Both headphone and earphone can have more than one driver unit in them, each of them aimed at generating a different range of frequencies. One driver can produce the sound between 20Hz and 20kHz, but with more than one driver involved, earphones can reproduce different frequencies with minimal distortion. But don’t think that just because earphones have multiple driver units that automatically sound they produce will be better! Well produced single driver headphones will generate better sound than badly made multiple drive headphones.

And if you are wondering what types of driver units exist out there and what are the differences, then keep on reading.

The most common type of driver is Dynamic driver since they are the cheapest to produce. Dynamic drivers use larger diaphragms, therefore they are capable of producing more powerful bass and attaining good sound pressure while not consuming much power.

This driver is built by three main parts and works by using electromagnetic forces: 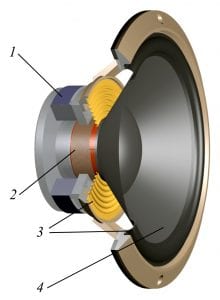 Voice coil becomes electromagnet, thanks to the magnet that magnetizes it. When the voice coil receives current, it creates a magnetic field, which then repels and attracts the voice coil. And since the diaphragm is attached to the voice coil, it also moves and displaces the air around it which results in sound creation.

The larger the air displacement the higher the volume of the sound. Therefore the driver must be able to displace the air in order to reproduce a good bass sound. That is exactly why dynamic drivers are great at creating a realistic bass response.

However, at high volume, the audio is susceptible to distortion, but with well thought out engineering this problem can be solved.

Some of the earphones that run on these drivers are  T20i by RHA and BeSport4 by Optoma.

This is what In-Ear Monitors mostly use. These drivers are very small and in-ear monitors usually contain one to four of them. 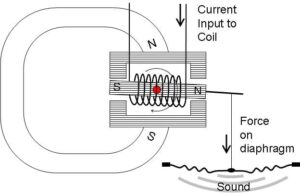 The miniature armature is surrounded by a coil of wire, which is then put between two magnets. This armature is attached to the center of the diaphragm. When the armature is equally distanced from both of magnets, then it is in the state of balance. But, when current flows through the coil, the armature becomes magnetized, forcing it to move towards one of the magnets. While the armature moves, the diaphragm that is connected to it also moves, and as a result, the sound is being produced.

Since IEMs can have the maximum of four drivers to complete the sound, they can be tuned to cover different frequencies, but their range is still limited.

One more con to add to this is that Balanced Armature drivers don’t displace air in order to create sound, so there is a lack of bass sound. For this reason, there can be found balanced armature headphones that contain one dynamic driver, so they can achieve producing quality bass sound. On the bright side, because a balanced armature driver does not displace air, they don’t have an additional air vent which provides them with better isolation, and you with better sound.

Earphones that use these drivers are SE535-CL by Shure, and Westone W40:

Here the diaphragm is put between magnets, making very clean and detailed sound without any modifications to it. That is why you can find these drivers in most high-end headphones and earphones. They are more likely to be found in over the ear headphones.

As you may have already guessed, these drivers produce sound thanks to the magnetic field.

These magnets are what makes this type of headphones larger and heavier, and also requires more power from the audio source or an external amplifier.

Regardless, they provide with an excellent, low distortion sound, and great quality bass response, since strong electromagnetic force allows displacement of a large amount of air.

If you are curious about the more in-depth, technical explanation on how these drivers work, then check this article here.

One of the most recent best headphones using this technology are HE400i by HIFIMAN and Audeze LCD-4.

These can be found in premium headphones, since they are extremely expensive, thanks to its complex driver, and the sound they produce is absolutely breathtaking. Their diaphragms are electrostatically charged, hence the name, electrostatic drivers.

Here you can check the amazing explanation of the processes which provides us with one of the best sound experience, as well as headphones powered by this high-end technology.

And now you are probably wondering which one is the best to choose. There is no doubt that electrostatic headphones would be the best ones, but taking into consideration that most people are budget restrained and that not everyone needs the most accurate frequency and bass response, dynamic drivers seem to be the best fit. However, if you are an audiophile, then going for more expensive, planar magnetic or electrostatic will definitely be worth it.

Laura is an editor as well as a marketing executive and now works full-time for wirelessheadphones.guru. She feeds the platform with all kinds of delicious stories and pictures. She loves to discover new wireless headphones, also he is a big fan of tech talk, enjoys photography, and loves to travel the world.