If Sony could ever come up with a smaller name for their wireless headphones, I would be grateful. Compared to names like the Bose 700, Sony WH1000XM3 is a terrible name. However, as the saying goes – never judge a book by its cover, both these bluetooth headphones are a power-packed device and a great experience for all. Today we are going to compare the features of Sony WH1000XM3  and the Bose 700  for the best performance.

While performing the sound test, both this pair of headphones had noise leaks but the Bose had the least leakage. Sony WH1000XM3 has a deeper, resonating bass and an overall warmer tone. Bose has a punchy, medium-level resonance and the bass is just enough for a delightful experience. The mid ranges are crystal-clear in the Bose 700 while they seem to be pushed forward in the sony wh-1000xm3. Bose sounds a bit mellow with a good frequency balance across the highs, mids and lows with less overlapping sound and jumbled sound experience, while Sony provided a much more ‘alive’ sound signature.

The microphones are crisp but Sony offers industry leading noise cancellation and you can hear your own voice better as compared to the Bose. ANC is much better on the Sony and it beats Bose by a good margin. However, the Bose 700 ANC has improved than its previous models but not as much as the XM3. 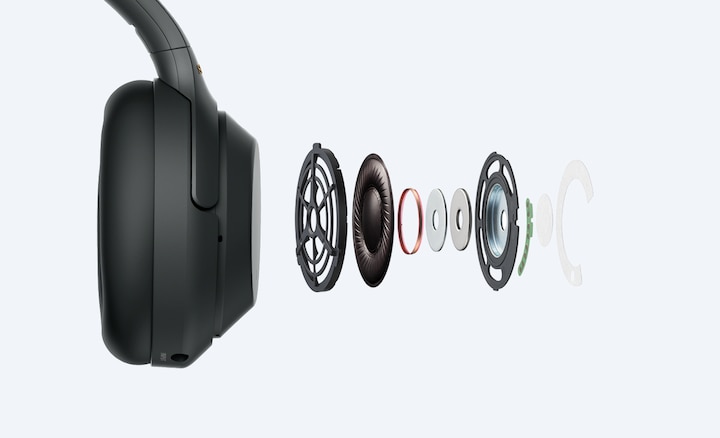 During stress test, the Sony WH1000XM3 did live upto its quality and price tag. Not taking it extreme, but not keeping it simple either, I pulled, stretched and twisted them a bit to look for creaks, squeaks or tear. The Sony headphones were firmer, had less play, and are beefier.  On the other hand, the Bose 700 is strong, have excellent build quality but did creak a little when I pulled them like the Sony.

The Sony air cups are comfortable but it gets a bit warmer compared to the Bose 700. Bose is a bit airier but you can feel slight pinching on the crown making you aware of their weight. Sony’s cups feels more comfortable with an even weight distribution. Overall, the sony wh-1000xm3 headphones stood out by a hairline difference in the comfort department. Mind you, Bose doesn’t disappoint but for larger heads, the pinch on the crown causes a bit of neck fatigue during long use.

Both of these true wireless headphones have ANC, which are controlled by a physical button on the earcups; it can also be configured to activate a voice assistant instead. Sony’s buttons are a bit raised and has a better placement while the Bose 700s have highly sensitive buttons that can get activated accidently while picking up.

Bose headphones offer you a 2.5mm port while the Sony has a 3.5mm audio jack for wired-audio option and both can be used as normal headphones. Rest remains the same – both have touch controls on the ear cups for play, pause, track-skips and volume adjustment.

Both headphones have a USB C charging port and the Bose runs for 20 hours on average on a single charge. Personally, I got 22 hours and 43 minutes on 50% volume on the Bose with ANC on. On the other hand, the Sony WH1000XM3 claims to have a 30-hour battery life. However, with the same settings of ANC, same playlist and 50% volume setting, I only got 20 hours and 10 minutes of use time. Here Bose actually beats Sony when it comes to battery time by nearly 2.5 hours.

When it comes to fast charging, Sony WH1000XM3 claims 10 minutes on a 1.5 amp power adapter or higher will give 5 hours of power. On the other hand, Bose 700 gives you only 3 hours of use for the same charging duration and power specs.

Bose 700 has a Bluetooth 5.0 and performs at considerable distances from your phone and well even through walls. The Sony WH1000XM3 has Bluetooth 4.2 and does a decent job with no noticeable lags or breaks. However, the Bose 700 feels satisfactory and the connectivity quality is quite distinct when you compare them. The bose noise cancelling headphones 700 connects with two devices simultaneously and swapping the headphones between them is simply a breeze scoring another brownie point. This could be a major decision-maker while choosing between the two for many people.

Sony has an app that you can install in your iOS or Android phone and provides L def transmission. Bose doesn’t offer this but is a good app in itself. Sony has adaptive sound control adjustments in the app and automatically adjusts according to your positions- sitting, standing or in transit. However, the firmware still needs a bit of improvement. Sony headphones connect app is straightforward with an array of standard features like equalizer, sound positioning, voice assistants and ANC controls.

The Bose app is simple with a battery indicator, 10-level ANC setting with 3-preset options, mic audio levels and voice prompts for battery level. Personally, I do not miss the adaptive sound control on the Sony and for me Bose and Sony did pretty well inspite of Bose not having an equalizer. Bose takes the cake with ANC fine-tuning and voice prompts here.

There you have it. The winner is quite subjective in this case since both headphones have a distinct personality. However, I liked the Sony WH1000XM3 better because I personally need deeper bass and a wider soundstage.

We will be back with more updates and news about exciting products in the future. Stay tuned :).